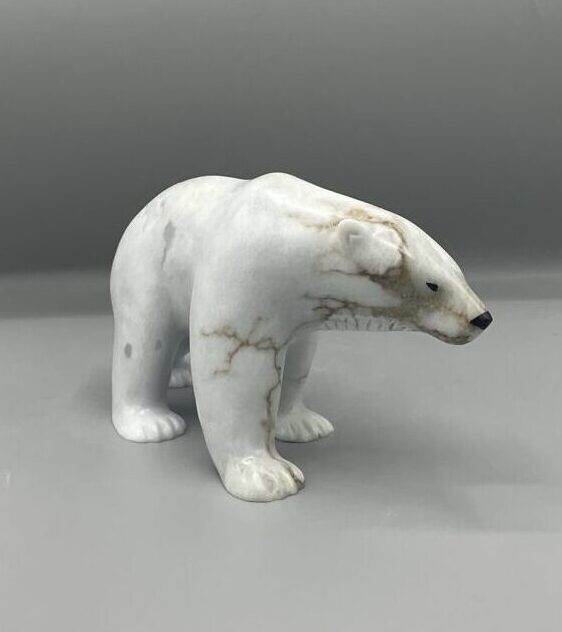 Derrald Taylor was born fourth of seven children in Tuktoyaktuk, Northwest Territories, a small community on the shores of the Arctic Ocean with a population of one thousand people. Growing up in Tuktoyaktuk, he spent much of his time hunting and fishing in the lifestyle of his ancestors.

Born into an artistic family, Derrald credits his father, Bobby, for instilling an interest in carving at an early age. Derrald would watch his father and then practice with hand tools on antlers and whalebone. Eventually, he progressed to soapstone and now uses all three materials to create his works of art. In the late 1980’s and early 1990’s, Derrald began using power tools to craft his artwork. He still finishes each piece by hand.

Derrald’s carvings reflect a hunter’s knowledge in his precise depiction of Arctic animals such as caribou, muskox, beluga whales and polar bears. His ability to capture the essence of the animal he is portraying demonstrates a firsthand intimacy with its characteristics and anatomy. His work is also inspired by his people and their culture. A familiar subject of his are Inuvialuit Drum Dancers playing in traditional dress.