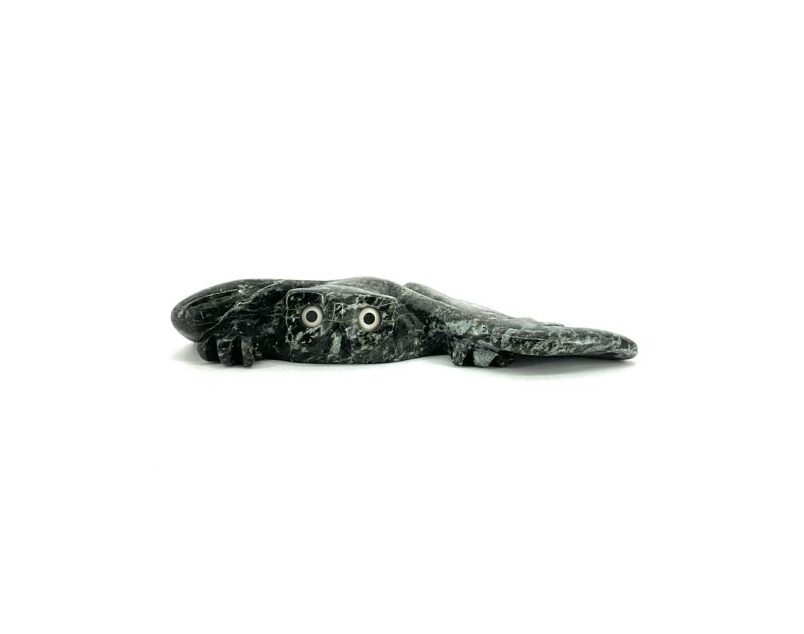 Joanassie Manning has lived in Cape Dorset all his life. He credits his grandfather, the renowned carver Osuitok Ipeelee, as a great influence on his work. After carving sporadically for a number of years, Joanassie is now working more consistently. He has evolved a personal style that is becoming stronger and more confident as his primary love of owls evolves through his sculptures.

In the past ten years, Joanasie’s artistic focus has been mainly sculpting owls. He enjoys making the Arctic owl in his own unique style. Joanasie is respected for his precise caribou antler eyes inlayed with dark stone or ash inlay. His owls, often representing a mother and chick, or sometimes more than one, are full of dignified beauty. He is known for sculpting his owls with tenacious wings, in a variety of positions and with faces full of expression.

Joanasie has previously carved figures of hunters and fisher women with perfectly detailed harpoons of wood and antler for the hunter and kakivak (a fish spear) for the fisher women. However, Joanasie has enjoyed sculpting caribou in the past. He has also been inspired by the work of some respected elders for the details put into their carvings.

His style has influenced the next generation of Inuit artists, including his son Mickey Qiatsuq, Adamie Qaumagiaq and Adamie Mathewsie. The artist’s carvings have been included in gallery exhibitions in both Canada and the U.S. Joanasie’s style has evolved into strong and commanding sculptures with a precise focus for the design and form.